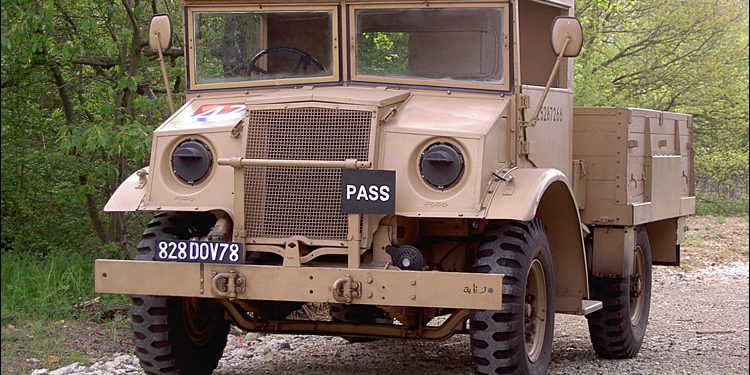 The Canadian FORD F15 belongs to the CMP family (Canadian Military Pattern) that were designed and built in Canada during World War II according to the British War Department specifications.

Therefore, like all trucks produced in Great Britain at that time, it is a right-hand drive vehicle, full wheel discs and two gas tanks. The white painted differential was a point of reference for the following vehicle during night convoys. To this end, a small light placed under the body was lighting the white painted area.

Its designation is “Ford F15”, F is for the name of the manufacturer, Ford, and the number 15 indicates its payload expressed in CWT, or 750 kg (CWT: Centum Weight, about 50 kg). This Ford F15 had no spare wheel. They were, as a number of Canadian vehicles of the same size, equipped with shielded tires.  Their sidewall was nearly 3 cm (13⁄16in) thick. If the tire was hit by a bullet or shrapnel, the vehicle could move far enough to escape the danger zone. The rectangular roof hatch is for an observer and the windshield tilted backward avoided reflecting sunlight and decreasing the visibility of the vehicle in desert area.

Painted desert yellow, it exhibits in the front, on passenger side, the insignia of the 51th British Infantry Division “High Land” staffed mainly with Scots. On the driver side, the blue rectangle with another red rectangle indicates that the vehicle belongs to an artillery Division. The white number 47 with the Division badge indicates that it is assigned to the 79th artillery Regiment of the 51th Division.

At the end of the war many of these vehicles were discharged because of the rear hand drive Additionally, the accelerator and brake pedals are inverted which often in an emergency situation led the driver instinctively to acclerate instead of breaking. 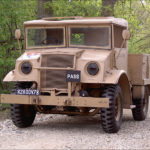 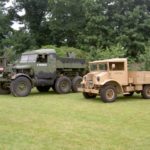 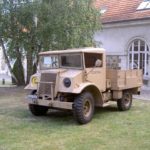