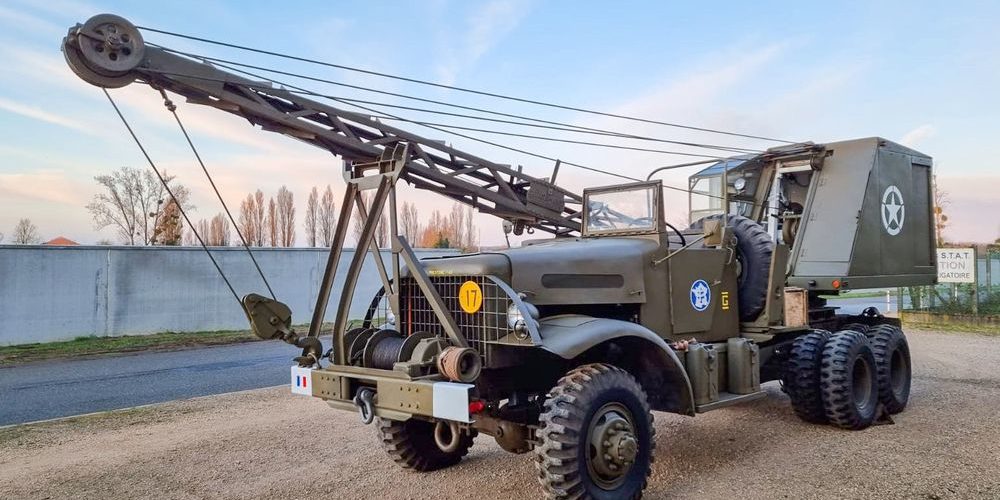 Salvaged from a junk yard in Isère, South of France, a big restoration work lies ahead ! The fact that, to the best of our knowledge, only 5 such vehicles survive in Europe motivated this ambitious move.  The fact also that the truck as the crane are complete (the missing truck hood and crane door were already being worked on inside our facilities at the time the photo was taken).

During the war the lifting-handling needs were important, both in the storage areas for gasoline and equipment and for unloading the amphibious GMC DUKW upon arrival on beaches. The concept of “forklift-pallet” was still in its infancy during the war. And no forklift of the time were all-terrain, though most of these handling operations were taking place on sandy beaches or in muddy fields. Remember that even during the Berlin Blockade in 1948-49, almost all handlings were done by hand, an achievement when one considers that some days there were 13,000 tons of various commodities delivered by air.

According to the War Department TM9-2800 “Standard military motor vehicles,” there were only three models of crane trucks during the war (but a variety of crawler-cranes):

The Coleman looks more in appearance to a workshop crane than to a truck crane.

The Brockway C666 is very representative of a generation of crane trucks that resulted from a more or less successful marriage between a truck and a crane that nothing predestined to meet.

The crane truck Lorain MC4 inaugurated a design that flourished, the carrier being designed from the outset to accommodate a crane: half cabin specially designed, cab in forward position to give a better view of the boom while on the road, built-in stabilizers. It had also a much larger lifting capacity than the Quick Way.

Both the Coleman and the Brockway pulled a one-axle Timpte QW-T-8 trailer carrying the accessories of the crane. The boom could be changed for other equipment: shovel with crowd, clamshell, dragline, pile driver with its hammer and trench back hoe. These possible equipments explain the two unused bearings that can be seen see at the bottom of the boom : they were used for the cable guide of the pulling cable of the “dragline” equipment. The trench back hoe equipment that existed for the Quick Way Model E was not on board the trailer. A 5’ boom extension (1.50 m) was part of the standard equipment.

For the record, at the end of the war, a Michigan TM16 crane was proposed on a Biederman P1 chassis (USAF 1945)

Brockway was founded in New York by George Brockway in 1851. After the wooden carriages, the first truck was produced in 1912. The company was taken over by Mack in 1956. The production stopped in 1977 and the name disappeared. In the family of heavy trucks 6×6, 6-tons, two dominated largely: Mack NM and White 666, the last one having its origin in the 1939 Corbitt 50SD6*.  Corbitt was a small manufacturer of North Carolina that could only produce during the war 3211 trucks.  The production of Corbitt was reinforced by the intervention of other manufacturers such as White, Brockway, Ward LaFrance and FWD. Brockway is best known for delivering the “bridge layer”, this version is designated B666, B for “Bridge erector.” The carrier version for the crane is designated C666, C for “Crane Carrier”. It has some specific features: boom support structure on the truck front bumper, narrow cabin, reinforced chassis, device for the blockage of the movement of the truck rear axles during movements of the crane.

The later version (1945) had stabilizers (a transverse beam with a jack screw on each side of the truck) and had also their rear leaf springs replaced by a “walking beam” ie a steel beam oscillating as the springs but offering no flexibility.

Quick Way was founded in 1929 in Colorado by Luke E. Smith. The driving idea was that a crane on a truck would move faster (quick way) from one construction site to another.  The brand disappeared in 1961, absorbed by Marion. This was one of the largest manufacturers of mobile cranes in the United States. Simplicity, reliability, robustness explain this success.  2,225 cranes “Model E” were produced to be mounted on the Brockway C666 as on other chassis. The technology of this crane is very simple: once the engine is clutched, it drives permanently all the cog wheels.  The cable drums as well as the swing drums are all equiped with drum clutches. The cab control levers actuate pistons that transmit hydraulic fluid pressure through hydraulic lines to the drums clutches via packing gland assemblies.  The drum brakes operate with brake bands.

It is a rare vehicle. Only two have been restored operational in Europe : one in the UK and one in Holland.

The models proposed by Quick Way were the following ones:

In the years immediately following the war, some tests were conducted with a light Bantam crane ABM51 mounted on a GMC CCKW 353 chassis.

Founded in 1915, Hercules reached its production peak during the period 1941-45 when the factory, running 24h a day, succeeded in supplying close to a million engines to the US Army and to the allies.  Located in Canton, Ohio, the company ended in 1999, victim of single market syndrome after working exclusively for the Army.

Front winch with two drums, capacity 12,000 lb (5,5 t) Main features of C666 : boom support structure on the truck front bumper, narrow cabin, reinforced chassis, device for the blockage of the movement of the truck rear axles during movements of the crane. The later version (1945) had stabilizers (a transverse beam with a jack screw on each side of the truck) and had also their rear leaf springs replaced by a “walking beam” ie a steel beam oscillating as the springs but offering no flexibility, wheelbase of 197″ instead of 220″ for the B666, Bridge Erector, and of 185″ for the « prime mover » (cargo), spare wheel holder behind the cab.

Clamshell weight (285 litres) : 680 kg. Inside the boom a small counter-weight carriage rolls on two rails accompanying the movements of the clamshell bucket. It keeps a cable taut, avoiding any rotational movement of the clamshell.

Timpte trailer QW-T-8 : empty weight 6,750lbs/3,100kg, weight once loaded with all the crane accessories : 16,260lbs/7,400kg.  Timpte is an important US trailer constructor that is still in existence today. 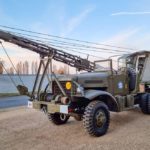 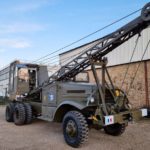 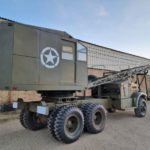 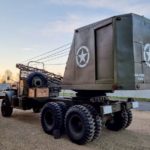 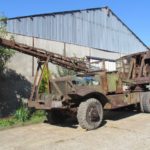