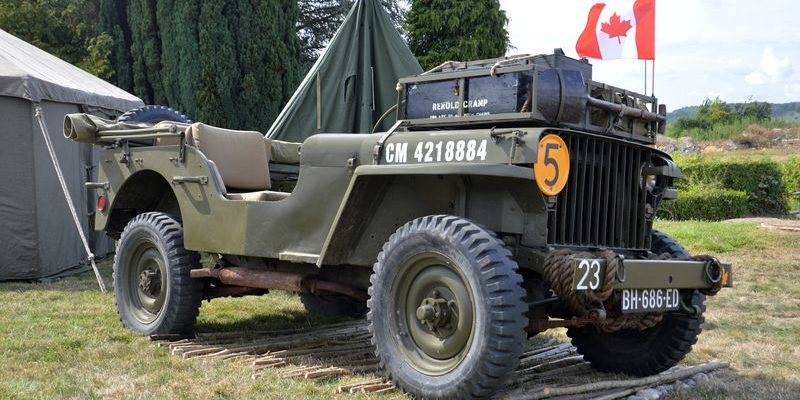 Under pressure from the Germans, Stalin asked Churchill to open a second front in the west. The Allies chose Dieppe for the proximity with England. But a lack of preparation and contingencies have made this raid a bloody failure. No bombing of enemy positions to avoid damage to the harbor, unexpected encounter with a convoy of German ships off Dieppe, unreported presence of pebbles on the beach, German troops on alert, ineffective radio communications, German troops underestimated, all went wrong …
The tanks of the Calgary Regiment are quickly paralyzed.  Some see their tracks jammed in the pebbles, others find themselves cornered to the dyke and concrete dams. Tank crews try to cover the withdrawal of a large number of soldiers, but most are killed or captured.
One of the four Jeep planned for the raid, could land. It was an Ornance Jeep carrying in its basket explosive charges for anti-tank defenses.  It seems that it do not travel more than 30 ft in the pebbles.   Then it stood still on a wooden lattice and the occupants had to run away to shelter themselves.
While fighting raged across the seafront, the sky was the scene of a fierce battle in which the Royal Canadian Air Force lost a dozen aircraft and the Royal Air Force, noblesse oblige, a hundred. The “Jubilee” operation ended in incredible confusion.
The last soldiers who had not been evacuated surrendered.  At 1:58 p.m., the guns fell silent. On the German side, there were nearly 600 casualties. A relatively low number when compared to that, crushing, of the Canadians.  With 4963 men engaged in land operations, only 2210, many wounded, managed to escape and reach England.  Canadian casualties amounted to 3,367 me.  There were also 1,946 prisoners.  After ten hours of carnage, the Marines had lost 88.4% of their headcount, the Royal Hamilton Light Infantry 82.7%, the Royal Regiment of Canada 87.3% and 96.3% for the Essex Scottish Regiment. A massacre.
The only Jeep arrived on the pebble beach was a “Slat grid” (flat iron grille) that Benoit could not find immediately.  This is why the first photos of the vehicle are not entirely consistent with the historical reality.  But this has been corrected since !
Other distinctive features of this Jeep can be noted:

Congratulations Benoît for this achievement that keeps alive the memory …