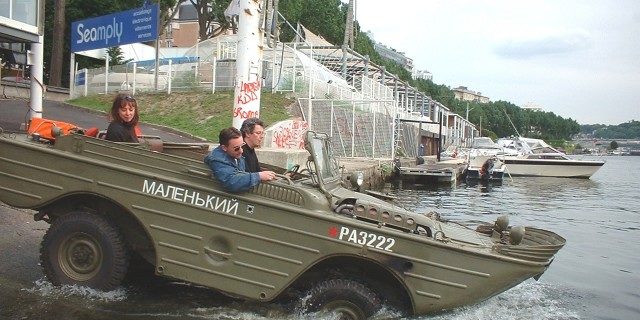 Follow Thierry with his inimitable style to discover the car …
GAS MAV 46 (малый автомобиль водоплавающий), or the history of the real fake copy of the Ford GPA …
“On a beautiful 1989 winter day I became of course unwittingly the owner of an amphibious military vehicle of the Soviet army ! While I was crisscroossing Czechoslovakia in search of Tatra parts I came across a sort of amphibious Jeep that was in the back of the workshop of a motorcycle collector.  My first reaction was to ask the master of the place how he had found that American amphibious car ? The reaction was swift, the Czech replied in a mix of German-Czech-English:
“Nicht Américan! (Not American!) … .Américan Material schrot! (US equipment is the shit) … .Ruski matérial Prima! (Russian equipment the best!) Verkaufen, Good price for you … (for sale, good price for you) ”
A month later I found myself in Paris with the machine in my garage. I will spare you all the details and all the surreal bureaucracy, the custom administrations and the stratagems that had to be developed to bring this floating machine in an underground garage in Suresnes.
From this car, I only knew the name : “GAZ 46 MAV”
– GAZ – Gorkovsky Avtomobilny Zavod – Automotive Factory Gorki
– MAV – which translates as “small amphibious vehicle”
– 46 – which corresponds to the project code.
Immediately, leading experts assured me that this GAZ AVM 46 was only a poor copy of the amphibious Jeep GPA. This news reassured me as it was of a nature to help me restore the vehicle.  Big mistake !  The only 2 things common to the MAV GAZ and the Ford GPA are the air in the tires and the gasoline in the tank.  The two cars have a totally different design. The GPA is a car that was made to navigate whereas the GAZ MAV is a boat converted for traveling on the road. The Red Army used many American vehicles and in particular the amphibious Jeep. Alas, it quickly revealed major defects like too low ground clearance and a lack of aquatic propulsion power. The Red Army needed amphibious vehicles because the great Russian territories are crisscrossed by rivers and streams, not to mention Volga river, which is 2,300 miles (3,700 km) long and 1.25 mile (2 km) wide.
The Russians engineers developed their project based on operations feedback with the Ford GPA.
The GAZ 46 has a one-piece hull, a large ducted propeller makes this amphibious an efficient tug, it has in the back a specific system for towing loads on rivers. The GAZ is really the big sister of the GPA, its hull, very hydrodynamic, is wider and longer, it has good ground clearance and excellent water stability.

The GAS MAV 46 is rare and little known, we must not forget that this amphibious vehicle was designed at the climax of the Cold War. According to the latest information, about 3,000 have been built.  The engine, gearbox, differential, brakes, running gears are shared with the GAZ 69 which is the terrestrial version of the GAZ 46. Some parts for this amphibious vehicle are impossible to find : the breakwater, the windshield, the propeller and the transfer case which is specific.
For 15 years my friend Christophe and myself travelled and sailed with our two GAZ 46. Unwittingly we have been promoting it toward some friends and collectors who have been seduced by the charm of this amphibious vehicle coming from the East.
Very often some people makes the remark that I am being imprudent to navigate in an amphibious vehicle while I do not swim.  My answer is always the same : “do you know an airline pilot who can fly? ”