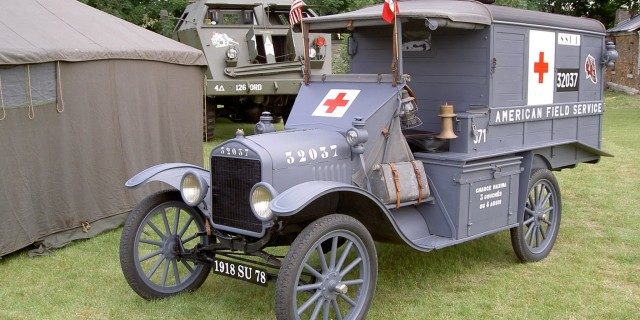 From the beginning of World War I, American volunteers came and joined the Allied troops. US private funds were raised and US Health Sections were created, with an hundred ambulances.
Bare Ford T chassis arrived in France and where they were equipped with a specific body. From 1917 and the US entering the war, part of the ambulances were painted olive green and were incorporated into the American forces. The Ford T ambulance motor is a 4-cylinder, 162 cui (2.8 l) developing 22.5 hp. The gearbox has 2 speeds.  Additionally to the driver and his aid, the ambulance can carry 3 wounded lying or 4 seated.
The model restored by Rémi is similar to the 1200 Ford T ambulances that were driven and serviced by 2400 American volunteers during World War I, which in turn gave birth to the American Field Service (AFS).
Over 500,000 wounded French soldiers were transported in these Ford T ambulances during the conflict.