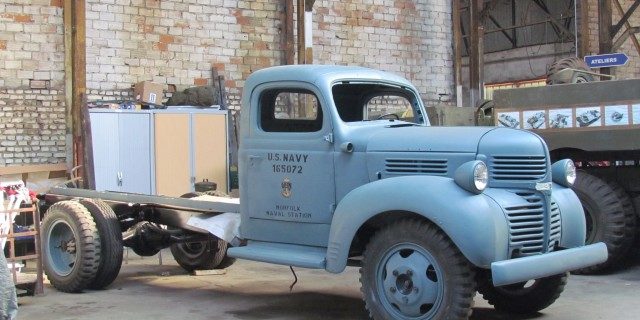 Our Dodge T110 light truck is undergoing a total restoration. In addition to its cab and mechanical elements we need to rebuild its original “stake and platform” cargo area.  We still have the original stakes and planks that made the sides, front and rear of the cargo area but in very poor condition.  Most of the iron fittings though are still there and can be recovered.  Missing ones will have to be provided, one way or another.  The flat bed is missing.   We had to start from a blank page, taking for model the other trucks we have with a wooden flat bed.

The restauration of this truck had been undertaken a while ago, but because of budget and priorities it was stopped at some point.  So when we stated to work again on this beautiful truck, the restauration was already well advanced.

August 2015: following a lot of mechanical work, a milestone is reached with cab painting (the chassis had already been painted a while ago).
September 2015: for the first time in a very long time, the truck moved under its own power in our garage. A few meters, “a small step for a truck but a giant leap for our T110”, showing that the clutch and the brakes work fine.
November 2015: work is continuing with the side panes and seat upholstery
December 2015: Arrival of the wood planks, stakes and beams already cut to size according to our own drawings.
February-March 2016: installation of the renovated windshield.  All the wooden pieces for the “stake & plateform” are treated, then painted before to start assembly.

2016: beginning of the assembly of the “stake & plateform”.  The grooves in the large planks of the bed have been made and the long omega shaped strips that will overlap the gaps between the planks have been manufactured.  End of 2016, the cargo area is finished.

2017: the restored truck is presented in February at the international Paris show “Retromobile.

2018: Some minor work is done: pivot axis in the front are replaced, and electricity is finished.

Bravo to the team that carried out this restoration!