Early in the afternoon, festivities began at Porte d’Orléans with a memorial ceremony in front of the Philippe Leclerc de Hautecloque and French 2nd Armored Division Monument. Music was performed by the band of the Paris prefecture of police.

After that, people who got a ticket from the shopkeepers were invited to climb onto the UNIVEM vehicles, which were parked next to the monument. The convoy then took the direction of the Denfert-Rochereau Square. The  French 2nd Armored Division used this very same route when it entered Paris on 25th August 1944.

There was a stop in front of the Gaumont-Alesia cinema, where vintage photos and films were displayed, with the Montrouge Saint-Pierre’s church bells ringing in the background. The locals and tourists could then contemplate the vehicles which were displayed until the end of the day. Several stands were set up and an orchestra even played WW2-era music.

This day was a success for the ACAGL14, whose aim was to organize a festive event for this anniversary. It was also a success for UNIVEM, whose dedication allowed to present in a very short period of time the Scout-Car in the colors of the the  French 2nd Armored Division. 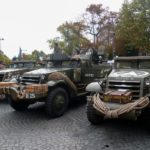 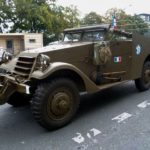