UFO in our garage 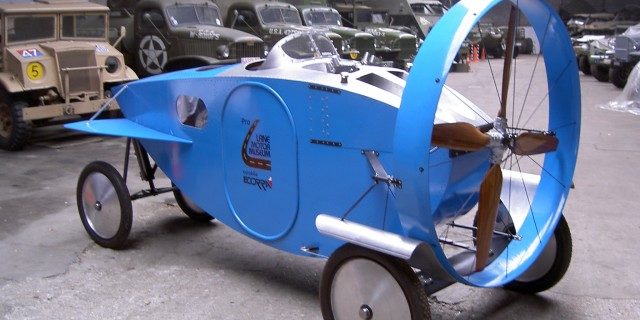 Marcel Leyat’s Helica was temporarily stored in our premises, waiting for the big  Rétromobile exhibition.

Marcel Leyat was an inventor, pioneer of aviation, aircraft manufacturer and French automaker.  He was born march 26, 1885 and died in 1986. He studied at famous Ecole Centrale de Paris, starting in 1907.

As soon as 1908, Leyat built a biplane glider he named « Quand Même », then a second one pulled by a De Dion car of 5 hp, with which he could fly 200m at 10m from the ground on august 15, 1909.  In 1910 he built an 11 m long, 16 m wingspan, biplane with propeller.  He competed with Bleriot for the fist Channel crossing.  During WWI he built a bomber and until WWII built about 30 different aeroplanes.

His automobiles were constructed 27, quai de Grenelle, in Paris.  His first modelk was called “Helica”, also known as “the plane without wings”.  The vehicles was inspired from a plane fuselage made of plywood and driven by a front propeller, with rear wheels steering and front wheels braking.  Passengers were seated one behind the other.  The engine was an 8 hp “Scorpion” that used 6 liters per 100 km (47 mpg).  The vehicles weighted only 225 kg (496 pounds), which made it a fast vehicle for the time.

Different versions have been produced, open-top or closed-cab :