The 1770 Cugnot artillery tractor on trials at UNIVEM

Nicolas-Joseph Cugnot was a French military engineer known as having built, between 1769 and 1771, the very first self moving vehicle in the world.  It was an artillery tractor motorized by a two-piston steam engine.  The original one is preserved in a Paris museum : the “Conservatoire National des Arts et Metiers” (http://www.arts-et-metiers.net/musee/visitor-information).

On the occasion of the big Paris show “Retromobile”, a precise replica built in the USA by a French man, Alain Cerf, has been tested in our premises.

Alain Cerf is an enthusiast amateur historian.  He no longer wanted to read in the books, as is the case since 300 years, that this machine had been a failure.  After extensive research, he found in some archives, in Austria, test reports concerning the machine dating from just before the French revolution (1789).  There, it was written that the “fire machine” fitted with a second, much improved, model boiler could operate more than an hour before loading again wood and water.

Unfortunately, history caught only the famous accident where the machine crashed into a wall at the Paris Arsenal.  But when it happened, Cugnot was not even present : the machine was operated by some Arsenal manager who wanted to show his ability to do it…

Alain Cerf’s reconstitution is extremely faithful for the frame as well as for the mechanism.

It requires 45 mn of heating before being operational.  What a revolution for the time ! For the very first time in history one could move on the ground otherwise than by walking or by horse riding ! 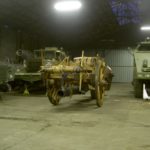 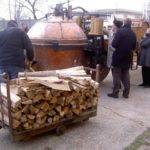 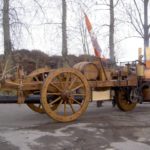 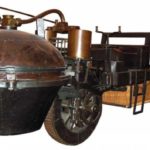